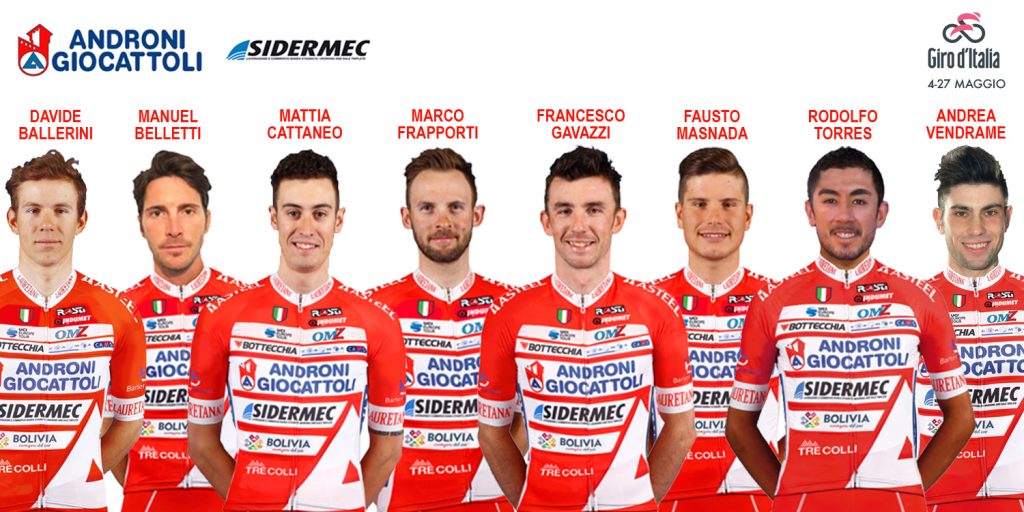 The Androni Giocattoli Sidermec for the Giro d’Italia is made. Just a week before the great start of the pink race on May 4th from Jerusalem, the team manager Gianni Savio announced the eight riders who will try to give satisfaction to the many fans and sponsors of a team that returns to the maximum national race., with the enthusiasm of all time and the certainty of honoring the three weeks of competition.

“Manuel Belletti will be our sprinter,” explains Savio, listing the riders. “The role of finisseur, however, will be up to Francesco Gavazzi; then we will have three climbers: Mattia Cattaneo, who will return after the fall at Coppi and Bartali, Fausto Masnada and the Colombian Rodolfo Torres ». To complete the team starters, which will bring the tricolor shield on the chest, will then be “a man of experience” as Marco Frapporti and two interesting youngsters like Davide Ballerini and Andrea Vendrame”.

The Savio team manager: «It will be a complete and competitive team. The boys prepared themselves better. We will try to do our part as usual. ”

With Savio in the flagship there will be the sporting director Giovanni Ellena. During the course of the three weeks on the second flagship will also alternate the other two SD of the team Giampaolo Cheula and Alessandro Spezialetti.