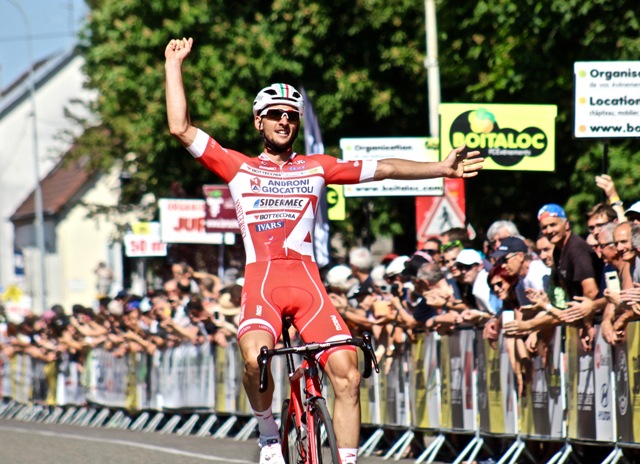 The Androni Sidermec Bottecchia team returns to win in France!
The team has been protagonist at the Tour du Jura, where in the first stage Mattia Frapporti and Fausto Masnada took part in the break away of 17 men, that ended with the splendid victory of the neo professional Mattia Frapporti, who could take advantage in the last kilometer of the good work done by the Belgians of the Wanty.
A great team performance, which also saw Fausto Masnada pass first at GPM in front of Pfimmer, second ranked. A stunning action that allowed him to wear the leader’s top mountain jersey.
“Congratulations to Mattia for his first win among the professionals and all team members. Once again we have demonstrated the validity of our project,” said Gianni Savio at the end of the race.
The same Masnada reached the podium on the second day the podium, behind Wanty’s Thomas Degand and in front of Guillaume Martin. The second stage, which recorded the success of Paolo Ficarra, has been ridden from Dole to Lamoura on the same route where a stage of the upcoming Tour de France will take place.