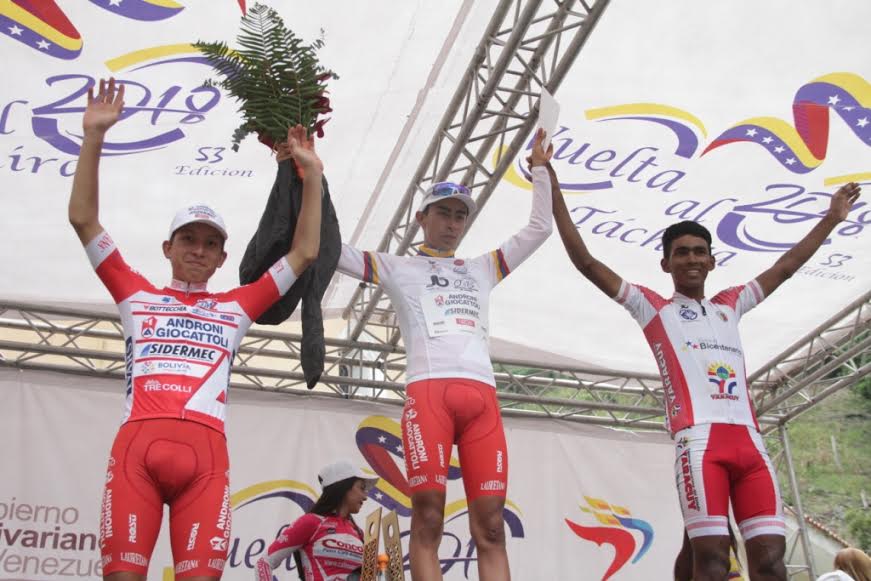 The victories continue in Venezuela! At the fourth stage the third success of the Androni Sidermec at the Vuelta al Tachira arrived. After the sprints of Malucelli, this time it was the 20 years old Colombian Ivan Sosa to sparkle. The great day for the Italian champions was completed with the third place of Costa Rican Kevin Rivera.

The uphill stage of yesterday at Tachira, which in Venezuela is known as the Vuelta Gigante de America, with the arrival at San Simon. The 147.9 kilometer fraction moved from San Juan de Colon. On the roads leading to the tourist resort on the border between Tachira and Merida (the first-class climb ended 3.5 kilometers from the finish line), everything was decided in the last five hundred meters after Kevin Rivera’s sprint, who reached the top of the race. Androni Sidermec’s young Costa Rican has stretched out with strength and explosiveness making a gap, but just a few meters from the finish line he had to suffer the comeback of the Venezuelan Anderson Parades (Gobierno de Yaracuy). At that point Ivan Sosa came out. So Sosa closed first with 3 “of margin on Paredes; Rivera was however very good at closing third at 9 “with a couple of seconds on the fourth Heiner Parra. The stage in the first part lived on a long breack away of seven men among whom Matteo Malucelli slipped inside, which collected important points, in the intermediate sprints, for the points classification that always leads with good margin.

Happy the team manager Gianni Savio that the local media said he was “happily surprised by the evidence of his young people. I knew they could do well, but I did not really think they could do that much. Really good “. For the 20 year old Colombian Ivan Sosa it is the first success in racing of the UCI calendar.